The Importance of Covenant Part 1
Covenant between God and Man 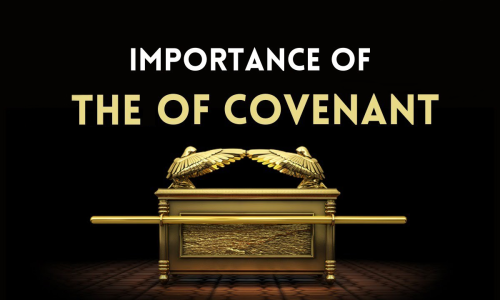 importance of it. Let’s examine the simple definition of a covenant.

times, it was done by the shedding of blood.

circumcised and all the males in his home, even servants, be

circumcised. This cutting and shedding of blood signified that there

has been made a bond that cannot be broken. Even though Abram only

knew the voice of God at that time, he obeyed and knew the

importance of covenant with God. This would change Abram and his

entire family and generations to come, including you and I.

God always knows what he is doing. He knows the end from the

beginning. (Isaiah 46:10) God’s promises to man are forever, no matter

what. Upon taking a journey through the old testament, you will see

disobedience but never changed. He expressed his disappointment

and the resulting consequences because of their choices, but he never

To God, a promise is a promise. He is the God of faithful and true until

the end. God is a God of integrity and honor.

For I am persuaded that neither death nor life, nor angels nor

principalities nor powers, nor things present nor things to come, nor

height nor depth, nor any other created thing, shall be able to separate

us from the love of God which is in Christ Jesus our Lord.

Absolutely nothing can separate us from the love of God. His

etched into His eternity.

Now man is a different story. Even though we are made in the image of

God and have many of His attributes, we also were given a choice. No

one, including God, wants to force someone to love them. Would that

be true love? I believe each one of us has the ability to love just like

God, and that our capacity to love and have faith is huge. As humans,

After the fall of man, God brought the covenant “proposal” to Abram.

Abram received the agreement and walked with God. He left his entire

family to find God and who he was in God. Have you ever felt like there

was something greater on the inside of you? And that there is more to

this than you can see? …there is!!! There is a treasure in the field and

than they ever thought they could have. (Matthew 13:44) After 25 years

of walking with God, God fulfilled His promise to Abram and then He

changed his name. What great faith! He made a decision, that no matter

the obstacles or what he could see, Abram held on to the covenant that

God and he made, and our lives are the way they are today because of

Abram’s honor and integrity to that covenant.

who, contrary to hope, in hope believed, so that he became the father

of many nations, according to what was spoken, “So shall your

descendants be.” [19] And not being weak in faith, he did not consider

his own body, already dead (since he was about a hundred years old),

and the deadness of Sarah’s womb. [20] He did not waver at the

promise of God through unbelief, but was strengthened in faith, giving

great deeds you do. Nor does it depend on how perfect you are. Rather

it is by the determination to stay the course, even when we make

mistakes; determining to keep ourselves fixed on the promises of God

by staying on the journey of faith and giving glory to God through it all!

Knowing that no matter what “I believe and trust God. I’m not backing

up, I’m going forward in what He has promised me and I’m walking it

out to the end”. God promises to do the same with you. That is a

covenant that He will never break!

The Importance of Covenant – “The Covenant

Between Man and the Church”

If this message has blessed you, please prayerfully consider giving to further assist us as we continue to touch the lives of many people with the gospel of Jesus Christ. (Please use our online giving button above)

The Importance of Covenant Part 5 – Covenant With Our Children

The Importance of Covenant Part 4 – The Covenant of Friendship

The Importance of Covenant Part 3 – The Covenant of Marriage

This site uses Akismet to reduce spam. Learn how your comment data is processed.